Every year the Department of Management is honored to recognize one of its former graduates as Alumni of the Year. The honorees are chosen because of their record of distinction in the business community, to the University of North Texas and to the community of North Central Texas. The award winners, listed below, set an example of excellence that current university students can aspire to, and, we couldn’t be more grateful for their contributions or proud to call them Department of Management alumni.

Mr. James E. Coln graduated from the University of North Texas (UNT) in 1960 with a B.A. in Administrative Management and is the 2013 Alumnus of the Year. Mr. Coln started with Clarke Printing and Packing in San Antonio, Texas at age 31 and became President at the age of 37. The company consisted of Southwest Carton Company, Sujan (polyethylene printing), Clarke Graphics (commercial printing), and Clarke Checks. Prior to joining them, he had worked for a year as an industrial engineer installing their standard cost system.

In 1971, he sold off all businesses except Clarke Checks because that business presented the best potential for growth and return on equity. At that time, the company had 179 employees and 4 check plants. When Jim retired in 1993 at age 57, the company was the third largest check printer in the United States with 52 plants, 5557 employees, and 70 sales offices.

Before he retired, though, Jim and his Clarke management team began the first steps toward building an organization that would someday win the Malcomb Baldridge National Award for Quality, a recognition of performance excellence in public and private U.S. organizations given by the President of the United States. Jim and his crew started a program called "first in service." In 2001, eight years after his retirement, Clarke American was awarded the Malcomb Baldrige Award for the best manufacturing company in the United States. Jim and his company are featured in Steve Smith's book, The Quality Revolution: Best Practices for the World's Leading Companies.

At the time of his retirement, Jim held multiple board positions with companies such as Clarke American, Checks in the Mail, Caradon America, MB Clarke, and PLC in the United Kingdom. In addition, he was involved in banking as a member of the Board of Directors of Texas Commerce Bank and the Bank Stationery Association, where he served as president for three years. He also served two years as president of the Printing Industry Association of San Antonio. 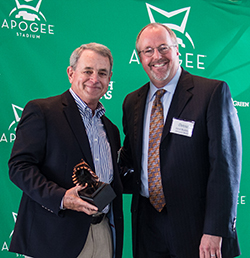 He was previously a partner/owner in Foodmaker Inc. (Jack-in-the-Box) in San Diego, and engineered a leveraged buyout in 1984. He held the office of Executive VP-Foodmaker and President of Foodmaker Realty Corp. He took the company public on the NYSE in 1986. He also has served as a Director of Dunkin’ Donuts – Boston and of marketing for M&M/Mars Corp – Chicago.

In 1988, Duffy moved to Austin, TX and formed the Oyster Investment Corp., which primarily purchased, operated, and developed over 2 million square feet of commercial and residential real estate and restaurants. Oyster Landing Marina/Hula Hut Restaurant/Mozarts in Austin were developed and are still owned and operated by OIC, along with various shopping centers and office buildings.

In 2001, Mr. Oyster took Panchos Mexican Buffet, Inc., which is a regional chain, private, and in 2002, purchased 13 Tony Roma’s Restaurants.

Duffy graduated from the University of North Texas in 1969, with a business degree in management. He served as the senior class president and was VP of Sigma Phi Epsilon Fraternity. He has two daughters and 5 grandchildren, and has been married to his wife, Tina, for 44 years. Tina also attended UNT, and his youngest daughter graduated from TAMS at UNT prior to enrolling at Stanford University. 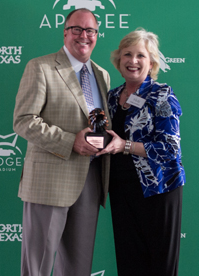 David Roylance graduated from University of North Texas with a Bachelor of Business Administration in 1985. Today, David, his wife Deborah and their two daughters reside in Houston, Texas. Since earning his degree at UNT, David has focused his professional efforts toward the efficient transition of central-organized markets to competition. He has established a distinguished track record in International and Domestic energy markets as they migrated from central planning to competitive market structures.

David is co-founder and President of Cavallo Energy Texas, a wholesale power and retail services company. He also co-founded and is Managing Director of Prism Energy Solutions, a strategic sourcing and energy risk management consultancy firm based in Houston.

David brings over 25 years of oil & gas, electricity and commodity risk management knowledge to the entrepreneurial phase of his career. Prior to co-founding his two companies, David established a proven track record of delivering innovative solutions to energy producers and consumers in Europe and the United States. David joined Reliant Energy in 1998, where as Senior Vice President, he led their commercial and industrial sales and marketing division. He also served in several other capacities with Reliant, including Natural Gas Trading, and helped establish a European sales and marketing presence. Upon graduation from UNT, David joined ConocoPhillips in New Orleans as part of Conoco’s finance and administration discipline, before transferring to Conoco’s worldwide headquarters in Houston in 1989. Over his 11+ years with Conoco, David held positions of increasing commercial and management responsibility in their domestic and international units.

Beyond his energy career, David is an active community volunteer and is Board Chair for Children at Risk, a high impact nonprofit advocacy organization that seeks to improve the quality of life for children across Texas through strategic research, public policy analysis, community education, cross-sector collaboration and data-driven advocacy. 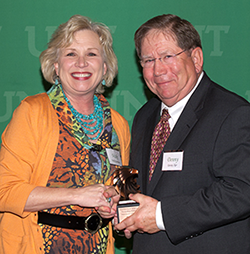 Denny Iker, a 1968 graduate of UNT with a BBA, is a Senior Human Resources Executive with global experience in manufacturing and financial services. He currently serves as Principal at the Yi Consulting firm, where he provides consulting services in a variety of Human Resources and Strategic Planning areas.

Denny and his wife, Linda, (also a UNT graduate) are semi-retired and enjoy a wide range of activities, including hunting and clay-bird shooting.