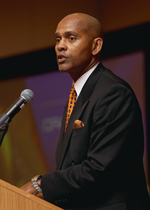 A McDonald's franchisee since 1989, Roland Parrish currently serves as Chair and CEO of the National Black McDonald's Operators Association (NBMOA). As chair of the 39-year-old organization, Mr. Parrish leads a team of McDonald's Owner/Operators dedicated to ensuring the success of McDonald's African American franchisees, while advocating for expanding opportunities for African Americans in the McDonald's System and empowering the communities their restaurants serve. Members of the NBMOA own more than 1,400 McDonald's restaurants throughout the United States with annual sales collectively exceeding $3.2 billion.

Mr. Parrish's career and success is founded upon his passions for education and supporting his community. Mr. Parrish currently owns 25 McDonald's restaurants in North Texas with sales of more than $50 million annually. Parrish McDonald's Restaurants, Ltd., has been named to Black Enterprise magazine's BE 100, as one of the Top 100 Black Owned Businesses in the U.S., based on sales volume for the past six years.

Prior to pursuing McDonald's franchise ownership, Mr. Parrish spent thirteen years working his way through the ranks of Exxon Co. USA before leaving the company as an award-winning District Manager overseeing retail operations in three states.

Mr. Parrish serves on the Board of Directors for Ronald McDonald House Charities of Greater North Texas. He is a current member of the President's Council at Purdue University and a lifetime member of Kappa Alpha Psi Fraternity, Inc.

Mr. Parrish has been recognized by many organizations for his leadership in business and the community and has been honored with many awards including: The Dallas Morning News Quest for Success Award, KRLD Community Award, KHVN Living Legend Award, Purdue University's Burton D. Morgan Entrepreneurship Award, and the A. Maceo Smith Award from the African American Museum in Dallas.

He earned a BS in Management from Purdue University, being named to the Dean's List seven out of eight semesters, and an MBA at Purdue's Krannert School of Business. Mr. Parrish lettered four years and served as captain of the track and field team. He was named to the Hammond, Indiana Sports Hall of Fame in 1993.

In 2010, Mr. Parrish received the Pinnacle Award, which recognizes philanthropy, from his alma mater. Most recently, Mr. Parrish gifted $2 million to support the university's Management and Economics Library renovation project. The library will be named the Roland G. Parrish Library of Management and Economics and is scheduled for completion in 2012. Additionally, the library will also bear distinction as Purdue's first major campus facility named in honor of an African-American alumnus.

A proud family man, Mr. Parrish and his wife of 30 years, Jewel, have two children and reside in DeSoto, Texas. His hobbies include running, biking, reading, playing musical instruments, and collecting vintage automobiles.